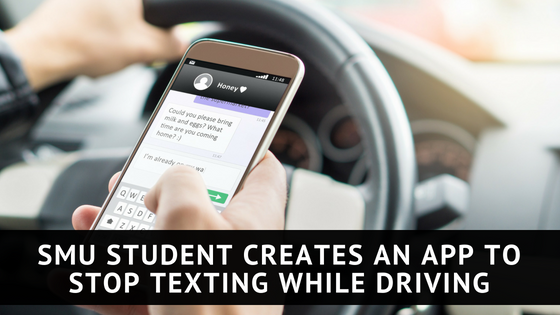 All it takes is to look around wherever you’re driving to see that distracted driving is becoming an epidemic.  And it’s getting worse. So many tragic accidents in Dallas and throughout North Texas could be avoided if people would just put their devices down and drive. Neha Husein, a junior at Southern Methodist University, is doing her part to find a solution. After Neha was rear-ended by a distracted driver several years ago, she created the Just Drive app. The incentive-based app senses when the your car is moving and awards points for every 10 minutes of undisrupted driving. Drivers can redeem the points for gift cards or coupons at various outlets. Driving safe and getting free stuff is a great combination!

While most drivers believe that texting while driving is dangerous – just how dangerous is alarming and often not fully appreciated. For example, studies show that reading anything on your phone takes your eyes off the road for a minimum of 5 seconds on average. At 55 mph, that’s like driving the length of an entire football field with your eyes closed.

Distracted driving in Dallas, and throughout Texas, continues to be a serious problem, as data indicate that drivers are not changing their behaviors.  In 2017, according to the Texas Department of Transportation, the total number of reportable motor vehicle traffic crashes on Texas roads was 537,475. Of those, 100,687 or 19% involved distracted driving (driver distraction, inattention or cellphone use).

These crashes resulted in 444 deaths and 2,889 serious injuries.  However, as even the best personal injury attorney or police officer will tell you, these distracted driving accident numbers are based on information contained in local police accident reports and likely are vastly underreported.  Often, police officers can’t determine whether the rear-end collision or the ran the red-light auto accident was because someone was using their smart phone unless someone actually saw it or someone admits to it at the accident scene.  The police officer investigating the collision has no authority to demand to see the driver’s phone.  As such, they often do not list distracted driving as a cause.

Distracted driving, speeding and DWI remain the major factors in the majority of serious or fatal car accidents on our roadways.  And with more people moving to Texas, there are more people on Texas roads and therefore a greater chance of collisions.

In 2017, Texas enacted a law, House Bill 62, in an effort to curb distracted driving. The new law, which took effect September 1, 2017, makes it illegal to text while driving. Forty-six other states also have similar bans on text and driving.

Although Texas law now bans texting while driving, many people are guilty of using their phones while driving – even if they don’t admit it. According to a 2017 study, distracted driving is probably even worse than you think – with drivers looking at their smartphones on 88 out of every 100 trips! The study, conducted by Zendrive, has Texas as the 17th worst state for phone-distracted drivers. The study found that during an hour-long trip, drivers in the U.S. spent an average of 3.5 minutes using their phones.  For the study, Zendrive looked at data from 3.1 million drivers, on trips covering 5.6 billion miles between December 2016 and February 2017.

And, of course, texting is only one thing people are doing with their phones. Many North Texans who have their phones out while on the road say they use the devices to listen to music, check social media, or just stay reachable.

While police departments and safety organizations across Texas are working hard to get the message out about the dangers of distracted driving of any kind, many say they aren’t sure how well the message is getting across. They explain that distracted driving is any activity that diverts attention from driving, including using your phone, eating and drinking, adjusting your car’s stereo, entertainment or navigation system, or anything that takes your attention away from the task of safe driving. And, unfortunately, distracted driving continues to increase, causing more injury and death on Texas roads.