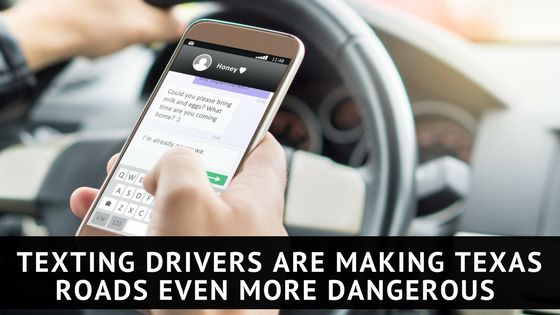 Given the ever-growing numbers of serious personal injuries and wrongful deaths in car accidents caused by distracted driving in Texas, and because of massive education efforts to inform the public about the extreme danger of using smart phones at the wheel, a recent study actually shows that Texans are getting worse about using their mobile-phones for various activities while driving.

More people are using their phones at the wheel, and for longer periods of time, according to a study published this month from Zendrive, a San Francisco-based startup that tracks phone use for auto insurers and ride-hailing fleets. According to Zendrive founder Jonathan Matus, “as you have more young drivers on the road, and as people increasingly become addicted to their smartphones, it will continue being a major health issue—almost an epidemic—in this country.”

From December through February of 2018, Zendrive technology monitored 4.5 million drivers and compared the results with the year-earlier period. It found that two out of three people used a mobile phone at least once. Among those who picked up their phones, they used them for an average of almost four minutes—a 5 percent increase from last year. The study showed that Texans spend on average almost 7% of their driving time on the phone.  And the number of Texans doing this has increased 31.6% over the past year!

In Texas, car crashes due to distracted driving are continuing to increase. According to Texas Department of Transportation (TXDOT) crash statistics, in 2017 distracted driving (driver distraction, inattention or cellphone use) was involved in almost 20% of all car wrecks in Texas.  This means that in Texas in 2017 there were over 100,000 automobile accidents caused by distracted driving.

Unfortunately, as any car accident lawyer can tell you, the TXDOT statistics drastically underreport distracted driving.  Often the police officers investigating car wrecks, who then file their motor vehicle accident reports with TXDOT, do not know if distracted driving was involved unless someone admits it or if a witness specifically reported seeing it.  In the absence of one of these two things, the police officer (who cannot order someone to look at their phone without a search warrant) has no way to know if distracted driving was a root cause of the collision.  As a result, the investigating officer will often only put the physical cause of the auto collision, such as “following too closely” or “failed to yield – stop sign.” Unfortunately, this does not address the root cause of the car crash – why the driver didn’t see traffic stopped up ahead or ran the stop sign.

As of September 1, 2017, a new statewide law in Texas makes it illegal for all drivers to read, write or send a text while driving.   While law enforcement officers are looking for drivers with their heads down distracted by their phones, the same problems arise when police officers are investigating auto crashes in determining whether distracted driving played a role in the accident.