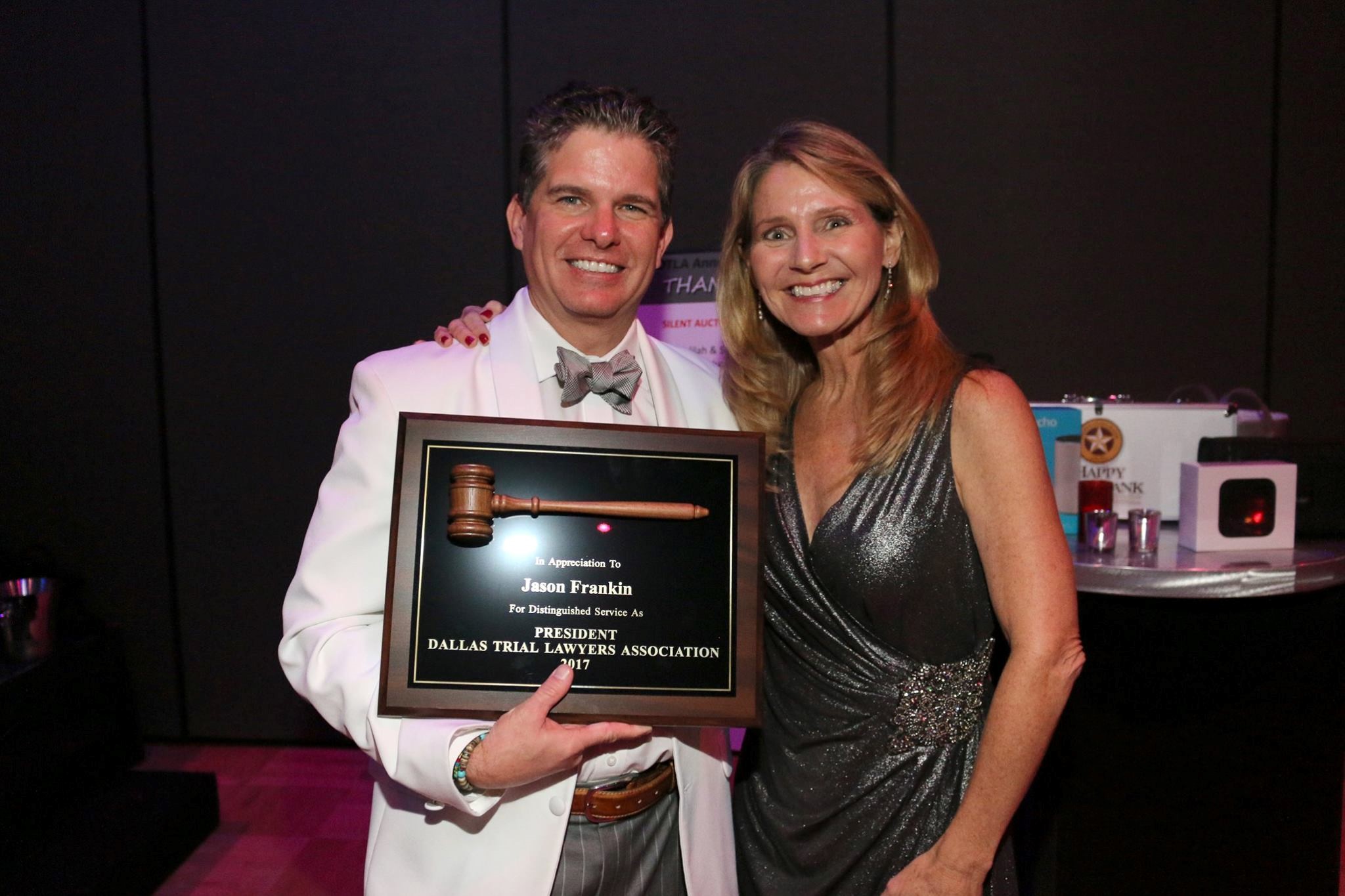 Jason Franklin, a Board Certified personal injury attorney in Dallas, Texas, was privileged to serve as President of the Dallas Trial Lawyers Association for 2017. DTLA is one of the largest local trial lawyer associations in the state of Texas. Its members represent people in a variety of types of personal injury, including accident victims, medical malpractice, workers compensation and wrongful death.

At the end of his term, Jason Franklin was pleased to report that as an association DTLA has never been stronger. The mission of DTLA is to support and empower trial lawyers to achieve justice for those who have been harmed. In this regard, DTLA is committed to be a diverse and influential group of highly engaged trial lawyers viewed positively by the local judiciary that furthers the trial lawyer profession through mentorship, an effective partnership with Texas Trial Lawyers Association, strong relationships with local bar associations and transparency with, and within, its membership.

“Our goal is to make our Association inclusive to all those who do what we do – regardless of one’s age, income, gender, the color of one’s skin, who a person decides to love or who they decide to worship, if you are a trial lawyer who represents people who have suffered harm then you should have a place in our Association where you feel welcomed and supported,” Franklin explains. To support these goals, DTLA implemented a graduated dues structure that makes it less burdensome for younger attorneys to join DTLA while simultaneously increasing overall membership dues revenue. Franklin reported that it accomplished both, increasing overall membership to record numbers while increasing the diversity of new members. In addition, the DTLA Diversity Committee, co-chaired by Pat Montes and Rachel Montes, also made great efforts this year at strengthening the relationships DTLA enjoys with its sister bar associations such as J.L. Turner, Dallas Women Lawyers, Dallas Asian American Bar, Dallas Hispanic Bar and the Dallas LGBT Bar.

DTLA hosts a monthly lunch that features a speaker and topic that educates lawyers about trends in the law and our practice areas. At the beginning of the year DTLA lowered lunch prices to make them more accessible to our members. As a result, CLE Lunch attendance increased 22% and the lunch crowd was far more diverse. Of course, this depended on having quality CLE speakers who benefits members and the DTLA Membership Committee, chaired by Jerry Andrews, lined up some wonderful Lunch CLE speakers: Dr. Jim Stanley (Common Injuries in Car Wrecks), Mikal Watts (Exoneration after prosecution), Mark Ticer (Real Stowers), Judge Maricella Moore (Judicial Philosophy), Chris Hamilton (Making the Jury Care about Your Case) and Lisa Blue (Modernizing the Jury Trial). Further, the DTLA Mentorship Committee, chaired by Mark Frenkel, rolled out the inaugural mentorship program.

During the 85th Session of the Texas Legislature, a bill was proposed (SB 985) that would close many of our Dallas County Courts. DTLA was at the forefront in opposing this bill and worked hand-in-hand with Dallas-ABOTA and the Dallas Bar Association to present a united front against this bill. As a result, the bill was quickly defeated. Congratulations to Quentin Brogdon and Rob Crain who did phenomenal work in their roles as Presidents of those associations in 2017.

Texas Watch is a non-partisan citizen advocacy organization dedicated to ensuring that insurance companies and other corporations are accountable to their customers. Texas Watch is hugely important to protecting injured Texans and their 7th Amendment rights. DTLA was proud to support Texas Watch in its fundraising efforts so that it can continue to protect ordinary Texans from powerful corporations and insurance companies when they attempt to take advantage of them.

DTLA has a long track record of protecting access to justice for those who have been harmed. “I thank each and every DTLA member for the honor and privilege of allowing me to serve as DTLA president,” Franklin says. “I am humbled to be included in a long and distinguished list of past DTLA Presidents.”