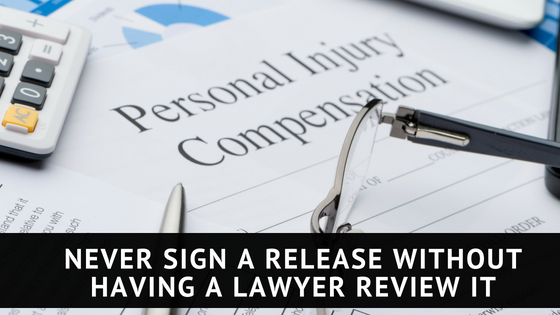 Before we begin, please know that The Franklin Law Firm offers a Zero Fee Guarantee. This means that you’ll NEVER pay a consultation fee and the only way our firm receives money for our legal services is when we are the ones who recover money on your behalf. So, no matter how big or small your case, we’re available to talk to you about the language in your Release at No Charge To You.

What is a Release?

A Release is a settlement agreement where a person agrees to waive (“release”) their legal rights in exchange for a certain sum of money.  For example, let’s say you were in a car accident in Dallas  – the other driver is clearly at fault, tells you they’re sorry and gives you their insurance information. You call to set up the claim and the at-fault insurance company sends over an adjuster to evaluate the damage to your car.  In speaking with the adjuster, they ask if you were injured and you tell them your neck is sore but you haven’t seen a doctor. Several days later the insurance adjuster calls and makes you an offer on the property damage.

You think it’s a fair offer and you accept.  The adjuster tells you that they will send you a Release and that you need to sign and return it before they’ll send you the check.  When you get the Release, it says that you agree to release the at fault driver and his insurance company from  “any and all claims” arising from the accident in exchange for payment of the agreed amount of money.  But did you know this Release would likely waive all your claims including medical expenses, pain and suffering, lost wages, as well as any future losses you may experience?  REMEMBER it’s the language of the Release and not what the adjuster tells you that counts. Even if the adjuster tells you the Release is only “for the car damage,” the language of the written agreement controls.

While many insurance adjusters are honest people, unfortunately there are some adjusters out there who are shrewd and downright aggressive in their efforts to settle a potential injury claim quickly.  Dallas personal injury attorneys get calls every day from people who have already signed away their claims in the days after the accident before they realized they were injured.  It’s normal for it to take some time before injuries become obvious.

During this window, some adjusters will try to “swoop in” and get you to settle your claims for cheap.  In the industry this is known as a “swoop and settle” claim tactic. They may tell you that because you haven’t seen a doctor in the week after the wreck you’ll never be able to recover money for injuries, but because they want to be fair to you they’ll offer you $500.  This is FALSE and is only designed to get you to settle any claims you may have for cheap. But once you sign away your claims, they’re most likely gone forever and you will never recover compensation.  Before you sign anything you should seek the advice of a lawyer, preferably a Board Certified personal injury attorney.

This “swoop and settle” tactic isn’t only used in small injury claims.  Often on larger claims the adjuster may tell you “if you hire a lawyer, then you will end up with less money in your pocket.” This is FALSE and the adjuster knows it. The insurance company knows they are likely going to have to pay a lot more money on your claim if you hire an experienced injury attorney.

Another trick is when the adjuster offers you the “policy limits” but never confirms in writing that the amount offered is actually the limits of the policy.  You sign the Release for $50,000 when the actual limit on the policy was $100,000.  Too bad, so sad – the language of the Release controls.

We have also seen the adjuster add parties to the Release who had additional insurance that would cover the claim. For instance, my law office once received a call from a North Texas family whose adult son was killed by a drunk driver. The family made a wrongful death claim against the drunk-driver’s insurance policy and the adjuster told them the policy limit was $100,000 and sent them the Release to sign. The family went to Super Lawyers and contacted The Franklin Law Firm.

We told the family not to sign anything until we reviewed the Release for them FREE OF CHARGE.  When we reviewed the Release, the language not only included the name of the drunk driver, but also included the drunk driver’s mother.  Given our years of experience we suspected that by adding additional people to the release that the insurance company was trying to pull a fast one over on this poor family.  We told the family about our Zero Fee Guarantee – that we would NOT take a fee on the original $100,000 the adjuster already offered, but if there was additional money we could get for the family then we would only take a fee on the extra money we recovered for them.

Well, it turned out our suspicions were right and the drunk driver’s mom had a separate $100,000 policy with the same insurance company as the drunk driver that applied to the wreck as well. If the family had taken the adjuster’s word for it and signed the Release, they would never have known about (much less collected) the additional $100,000.

The moral of the story is simple: Never sign a Release until you consult with an experienced attorney and get reliable legal advice.  It doesn’t have to be us, but The Franklin Law Firm will be happy to review the proposed Release under our Zero Fee Guarantee at no cost to you.  We just want to make sure that you’re not being taken advantage of and that you know the rights you will be signing away.